Skip to Content Skip to Navigation
Home / About / History

Shortage of pastors and teachers in Australia

Providing qualified pastors and teachers has always been a vital concern of Australian Lutherans. Since the earliest German settlers arrived in 1838 in Adelaide, South Australia, people have been needed to minister to scattered communities, often quite isolated, and to teach in the confessional schools that were established early on in many congregations. Need exceeded supply from the very beginning.

Initially the Lutherans attempted to train pastors and teachers within Australia. Using a peripatetic or tutorial approach, Pastors Gotthard Fritzsche and August Kavel took turns in theologically educating two prospective pastoral students. This joint approach collapsed in 1846 when the two Lutheran leaders, and their congregations, parted company over theological and related issues.

College in the Adelaide Hills

In the early 1850s Fritzsche developed a small college at Lobethal to continue theological education of suitable people for pastoral and teaching ministries. The college concept made it possible for students to be together in community, but since Fritzsche also continued to be parish pastor the teaching strategy was basically tutorial. Students accompanied Fritzsche on his journeys between congregations, and he taught them as they walked or rode together. Three pastors and several teachers graduated from the college in the mid-1850s.

Theological education in Australia on hold—Europe steps in

With the death of Kavel in 1860 and Fritzsche in 1863, the ability to provide theological education in Australia diminished. A number of factors, including continued German migration and renewed interest in bringing the gospel to Aboriginal peoples, heightened the need for suitably educated people. Lutherans in Australia looked to Europe. From the 1860s through the turn of the century, pastors were sought from the Hermannsburg Mission Seminary, the Basel Mission Seminary, and the Neuendettelsau Mission Seminary.

Another brief attempt at local training

For a short time in the late 1870s the Evangelical Lutheran Church of Australia (ELCA) attempted to use teacher W.T. Boehm's Hahndorf Academy/College as a training institution for pastors and teachers. Financial and staffing difficulties cut this program short.

Support from the USA

Europe was prominent in the supply of pastors for Australasia in the second half of the 19th century. Recognition of theological like-mindedness, disillusionment with some pastors trained in Europe, and personal contact induced the ELCA to turn to North America for its pastors and teachers. As a result, the colleges and seminaries of The Lutheran Church Missouri Synod supplied pastors and also trained Australians for ministry in the ELCA.

Despite being able to obtain pastors from North America in the late 1800s, the ELCA maintained its interest in providing theological education for Australians in Australia. A theological seminary for pastors and teachers took shape in Murtoa, Victoria, in 1892. Pastor J.F. Kunstmann of Concordia Seminary, St Louis, became a professor of this institution in 1893, and the following year it became known as Concordia College and Seminary. This institution and name continued until 1966 when the new Lutheran Church of Australia was formed.

In 1921, when five small Lutheran synods came together to form the United Evangelical Lutheran Church in Australia (UELCA), Dr F. Richter, president of the Iowa Synod in the USA, advised the new combined synod to form a seminary. He believed this would help to cement the union. For a brief period Wartburg Seminary operated in Tanunda with Pastor Johannes P. Löhe as its director. With the purchase of suitable buildings in North Adelaide, Immanuel College and Wartburg Seminary moved to this location. In 1923 the institutions were reopened as Immanuel College and Immanuel Seminary. The seminary continued until 1966 when the Lutheran Church of Australia came into being.

After a long and intensive period of dialogue and negotiations, the ELCA and the UELCA joined in 1966 to form the Lutheran Church of Australia (LCA). The young church was committed to the formation of a single seminary to replace the existing Concordia and Immanuel seminaries. The new seminary was to educate pastors. Since lay people, particularly teachers and deaconesses, had received part of their education in the former seminaries, the new church resolved to create a new institution to meet the need. The end result was the formation in 1968 of Lutheran Teachers College on the site of the former Concordia Seminary. Luther Seminary, designed to train pastors, was sited on the campus of the former Immanuel Seminary in North Adelaide, and commenced operation in 1968. Dr Elvin Janetzki headed up the college, and Dr Siegfried Hebart led the seminary.

Over the years Lutheran Teachers College increasingly focused on the development of teachers, and found little time to devote to theological education of other laity, which had been part of its original charter. To fill this gap the LCA founded the Lutheran School of Theology in 1994. For the next four years the three independent theological schools of Luther Seminary, Lutheran Teachers College, and the Lutheran School of Theology occupied the same North Adelaide site and operated under an the umbrella of 'Luther Campus'.

With a vision of co-ordinated and integrated Lutheran theological education offered in a single institution, in 1998 the LCA closed the three existing tertiary schools and formed a new Luther Seminary offering three programs. The emphasis was on vocational formation of people to meet the needs of the church in a post-modern society no longer literate in the Christian faith. The institution was also planned in such a way to offer a high standard theological degrees and awards with academic rigour. Dr John B Koch was appointed as the first principal.

In 2000 the LCA set up a task force to consider a new name for Luther Seminary. The church wanted a name that would indicate the full scope of the Seminary’s task as the tertiary institution of the LCA. A proposal was put forward at the General Synod in October 2003 and Australian Lutheran College (ALC) came into being from 1 January 2004.

Discussions of a move towards greater engagement with the Australian educational community, particularly in theology, had been going on for a number of years. The proposal to join the then Melbourne College of Divinity was canvassed at the LCA Synod in 2009 without opposition and in 2010 ALC applied to become a Recognised Teaching Institution of MCD. In 2012 MCD became the University of Divinity, the first specialised university of its type in Australia.

As a College of the University ALC retains its theological, ecclesial, and financial independence as the tertiary institution of the LCA, while the University takes care of registration and accreditation issues for all higher education awards. Through becoming part of the University, new possibilities opened up for ALC in the field of theological research.

ALC continued to seek new methods for relevant theological training for the church in Australia. This led to the establishment of ALC's first Vocational Training and Education (VET) qualifications in 2010, and the launch of a new ministry called 'Grassroots Training', with the tag line 'everyday people for every day ministry'. To align with the strategic direction of ALC, Grassroots Training was rebranded as ALC Training in 2019.

In 2009 ALC established the Australian Lutheran Institute of Theology and Ethics (ALITE). The purpose of the institute was to initiate, support and promote research based in Lutheran theology and ethics, and to assist in its contemporary application within the Lutheran Church of Australia and beyond. Following the development and implementation of the College’s new Strategic Direction (2017–2022) ALITE devolved to be included as part of ALC Research under the leadership of Professor Wendy Mayer. In this way ALITE’s purpose and objectives will continue to be advanced as a coherent part of the College’s whole research culture.

With the endorsement of the General Church Council of the Lutheran Church of Australia, ALC is seeking through its new Strategic Direction (2017–2022) to align its mission and operations with the wider mission of the Lutheran Church of Australia and New Zealand in its contemporary, 21st century and Australian–New Zealand–Asia-Pacific context. Through the implementation of its Strategic Direction ALC seeks to see God’s love in Christ coming to life by preparing God’s servants—pastors, teachers, church workers and volunteers of all kinds—to serve and lead with Christian faith, integrity, competence and compassion in a diverse and changing denomination and world. 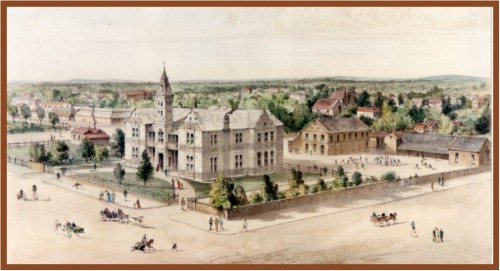